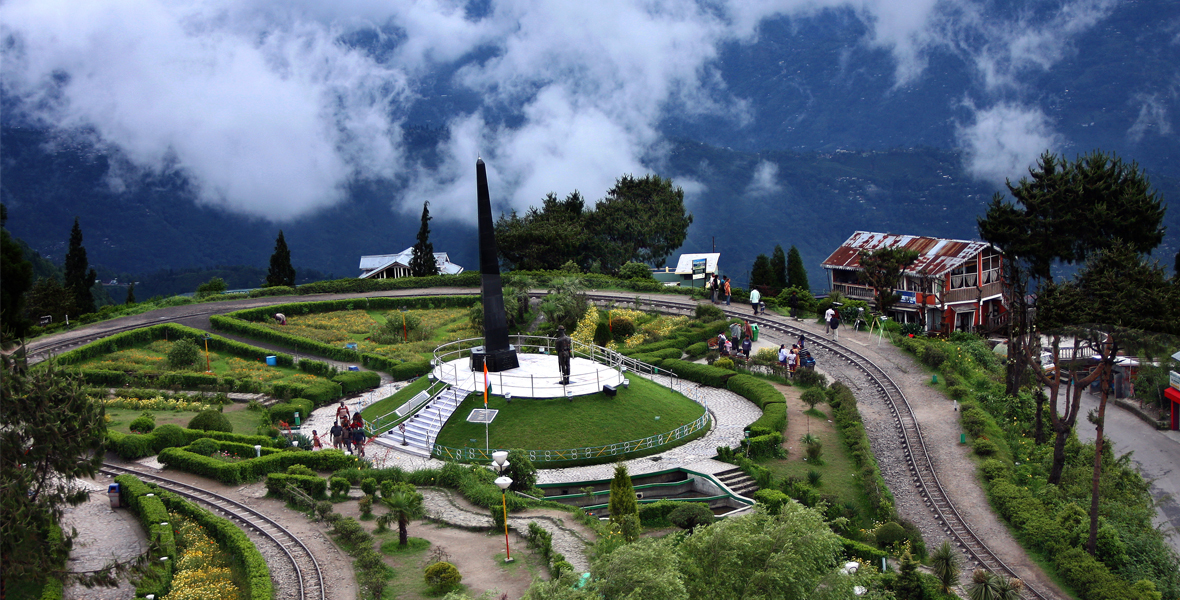 ( 6 km from the Hotel )
Located in Dali which is about 5km away from Darjeeling Town, it was originally built at the time of Kyabje Thuksey Rinpoche in 1971. He was a well known religious Tibetan teacher. Dali Monastery belongs to the Kargyupa sect. Today it is the head quarters and residence of Drukchen Rimpoche the XII, who is the supreme head of the Kargyupa sect of Buddhists.

( 500 m from the Hotel )
Chowrasta, a wide promenade atop a ridge lined with shops and restaurants is taken to be the heart of the town. Here people gather to chat, spend time basking in the sun or just to snatch a moment of peace. The Brabourne Park is attached to the Chowrasta and now features a musical fountain. This place is an open space and free from vehicular movements from where one can enjoy the scenic beauty of the mountain range and take a charming stroll at the Darjeeling Mall. Chowrasta is the central place of the Mall Road.

( 10 km from the Hotel )
Situated at an altitude of 2590 metres (8482 ft.) and 13 kms from the town, this spot has earned international fame for the magnificent view of the sunrise over “Kanchenjunga” and the great Eastern Himalayan Mountains. Even Mount Everest, the world’s highest peak, is also visible from here.

( 6 km from the Hotel )
About 5 kms from Darjeeling, this Railway Loop is a marvellous feat of engineering. It is fascinating to watch the toy train wind its way round the loop. The War Memorial constructed in the memory of brave sons of Darjeeling who died in different wars since 1947, is worth a visit. A glorious view of snowy peak and town can be seen from this place. Timings: Sunrise till two hours after Sunset.

( 3 km from the Hotel )
The Shanti Stupa was established by Nipponzan Myohoji, a Japanese Buddhist order. Situated on the slopes of the Jalapahar Hill the pagoda can be reached by foot or on taxi. The pagoda is the highest free structure in the town. It also showcases the four avatars of the Buddha.

( 1.5 km from the Hotel )
The Himalayan Mountaineering Institute was set up following the successful ascent of the Mount Everest-the highest peak in the world by the local hero Tenzing Norgay Sherpa and Sir Edumund Hillary on 28 May 1953. The oldest mountaineering institute in the country carries out various mountaineering courses every year. Apart from Tenzing, legendary mountaineers like Nawang Gombu(the first man to climb Everest twice) and Lattoo Dorjee Sherpa have helped build the reputation of this pioneering institute. The institute is presently under the purview of the Ministry of Defence, Government of India and its museum is worth a visit.

( 1.5 km from the Hotel )
Adjacent to the Himalayan Mountaineering Institute, it is a high altitude wildlife park and new home for Siberian Tiger, Himalayan Black Bear, Deer, Red Panda, Snow Leopard and Birds. The Snow Leopard breeding centre was started in 1986 to breed Snow Leopards in captivity with the help of International Snow Leopard captive breeding project.

( 2 km from the Hotel )
Darjeeling-Rangit Valley Passenger Cable Car is popularly known as the Ropeway. It is about 3 km north of the town and situated at what is known as the North Point. The Ropeway is India’s oldest passenger ropeway and connects Darjeeling with Singla Bazaar at the bottom of the valley. The present ropeway has been extensively modernized and visitors can now safely travel over the clouds to witness the aerial view of the lush green tea gardens below.

( 7 km from the Hotel )
Also called Sakya Monastery, this monastery in Ghoom is located 8 km from Darjeeling. Sakya monastery is a historic and significant monastery of the Shakya Order. The original monastery was built during the early twentieth century. The monastery can accommodate around sixty monks. The statue of Maithreya Buddha which is 4.57 meter high, of this monastery is of interest here. The monastery also preserves some of the rarest Buddhist manuscripts.

( 1.5 km from the Hotel )
Of about seventy tea gardens in this hilly region, this is one of the nearest, about 3 km from the town. Here one can see the processing of the world famous Darjeeling tea. Timing: 8 a.m. to 12 noon and 1 p.m. to 4.30 p.m. Closed on Sundays (afternoon) and Mondays (full day).

( 12 km from the Hotel )
Situated 10 km from town, Rock Garden and Ganga Maya Park has now developed into a very attractive picnic spot with natural water falls. The park offers boating facilities and is endowed with great scenic beauty. Ample eateries are available for visitors to indulge in local delicacies and one can even buy souvenirs. No fees are charged for taking photographs. Visitors are however, required to make arrangements for transportation. A two way travel arrangement is advisable.